I just want to share a few words with you about the second WBC reunion that concluded a week ago. Much encouragement, laughter, joy, and a few tears were shared by all who came. The singing led by Keith Lancaster and Gary Dodd stirred our hearts and brought back great memories of the time when we lived in Williamstown. I can’t put down in words that would accurately describe the worship service on Sunday morning encouraging us to think about the greatness of God our Father, Jesus our Lord and Savior, and of Heaven that is being prepared for us. I can’t speak for anyone else, but it was an experience that I will never ever forget. All the messages by Jim McGuiggan and David Powers spoke to our hearts about what is really important and eternal- our faith and what we do with it if we believe and act on it.

The New Life Trio of Tom Arnold, Mark Mitchell, and Keith as well as the New Life Quartet of Phil Dalton, Ron Norman, Dave Yarbrough, and Keith were as good as they ever were. I had forgotten some of the songs of the early groups of New Life but was glad to hear them again. Seeing the latter group was, for me, an answer to a six year prayer to hear them singing once again in Williamstown where it all began for me. We learned a little history of how the groups were put together and some of the things they experienced. I think the latter group was surprised to learn of the original plan to buy an elite travel bus with all the bells and whistles and comforts of home but instead had to settle for the “Blue Goose” when funding didn’t materialize. Trust me, you just had to be there to understand this.

We had a time of sharing of stories that touched a wide range of emotions from lighthearted to funny to powerful and emotional. Some of them we all knew and some we heard for the first time. I guess we saw a side of Marvin Greene that we all suspected existed but was confirmed when he shared how he “growed up”. Marvin tried to explain how poor he was but, trust me, his past was rich with material for him to learn to tell a tale.

Awards were given to some students and staff for their contributions to the College but the one that really topped them all was Mark Mitchell’s tribute to Dave Powers. He said that the weekend seemed almost designed to recognize others but obviously overlooked the one who really was the reason for us ultimately choosing Williamstown. It couldn’t have been said any better or more sincerely for all of the student body. It was a very emotional tribute to a most deserving man.

We were treated to a grand weekend of spiritual refreshment hosted by the Williamstown Church. This was no easy task for the church to welcome us in for the weekend. We owe a debt of gratitude and thanksgiving for their hard work and service to make this a successful endeavor. Many remember a church with a large membership and great attendance- like the song My Town says, “we’re off to Sunday service at the Church of Christ, and if we want a seat, we better leave right now.” As we have transitioned into our present lives, so has the church in Williamstown. It is a much smaller congregation that has weathered many storms. However, when I have the opportunity to go back and spend time in Williamstown, it still feels like home to me. I hope that was the case for you if you were able to be there for the reunion. It gives me a glimpse of what God is preparing for us. 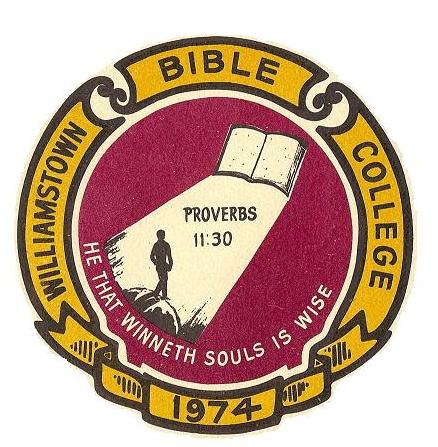